Cornell University recently hosted colleagues from Columbia University for a meeting of the Margarete Bieber Reading Group. The reading group was formed in Spring 2019 with students and professors from both Cornell and Columbia.

Margarete Bieber (1879-1978) was a German Jewish classical archaeologist. When she assumed her position at the University of Gießen, she was only the second woman to become a professor in her country. However, following the rise of the Nazis in 1933, she was forced to emigrate to the United States, where she joined the faculty at Columbia and Barnard College. 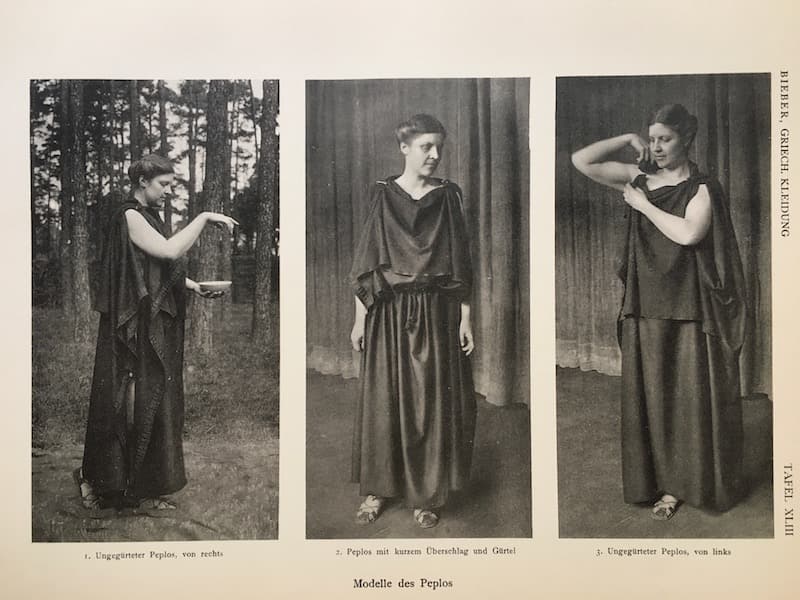 The reading group is devoted to studying Bieber’s work on ancient theater, dress, Hellenistic sculpture, and ancient copies to understand, as Professor Annetta Alexandridis says,  “whether and how academic, cultural milieu, and life at large in the United States transformed Bieber’s intellectual trajectory, work, and attitude towards her field as an immigrant and female scholar.” The group meets three to four times per semester, and each semester is devoted to one of Bieber’s major areas of research. This semester was dedicated to her reconstructions of ancient dress in comparison to recreations woven by American Eva Palmer Sikelianios (1874-1952), who tried to revive ancient Greek culture in dress, dance, music, and theater. The most recent meeting on Cornell’s campus included a tour of the university’s costume collection led by Professor Denise Green (Fiber Science and Apparel Design).

The Margarete Bieber Reading Group is part of a larger project initiated by Associate Professor Annetta Alexandridis from Cornell University (Classics, Archaeology, & History of Art) and Professor Francesco de Angelis from Columbia University (Art History and Archaeology), which will culminate in an international conference in 2021. The group also welcomes graduate students from both universities to participate. Deborah Sokolowski, a PhD student in Classical Studies at Columbia who was part of the recent Cornell visit, commented on her experience: “I joined the reading group because of my interest in classical reception studies in 20th century Europe, but our conversations together have prompted me to critically reflect on how my own research is inextricably influenced by current affairs and trends as an American student in 2020.”