March 19, 1985 - "Time and Redemption"
Putnam refers to themes of time and redemption in Horace's fourth book of odes, focusing on the disappearance of winter, the arrival of spring, and the transitory nature of the "deaths" of the seasons as compared to human death.

March 26, 1985 - "Festivity's Music"
Putnam focuses on the themes of party and pleasure in Horace's fourth book of odes.

April 9, 1985 - "Sources and Song"
Putnam discusses the odes of Horace's fourth book and his influence on culture.

April 16, 1985 - "Past and Future Time"
Putnam discusses Horace's odes and analogies of them in more recent works. 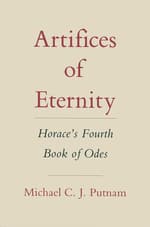 Artifices of Eternity: Horace’s Fourth Book of Odes is a part of the Townsend Lectures Series of Cornell Studies in Classical Philology.