Walter Ralph Johnson, University of Chicago, delivered seven Townsend Lectures in the Spring of 1989 on "Askesis and Caprice: Freedom in Horace's "Epistles"."

February 14, 1989 - "Mirrors for Proteus: Some Versions of Horace"
Johnson addresses the autobiographical and fictional aspects of Horace's "Epistles". He also discusses Horace's roles as a courtier and humanist and Horace's ideas concerning the nature of the self.

February 21, 1989 - "In the Rag and Bone Shop: The Father"
Johnson addresses the desire for freedom which ripples the surface of Horace's "Epistles". He discusses Horace's self-examination and the anti-climax he experienced after finishing the Odes.

February 28, 1989 - "Still in the Rag and Bone: The Hive"
Johnson discusses Horace's attitudes towards Augustus, Maecenas, and the vulgi or "vulgar folk". He addresses Horace's view of the average citizen's freedom and Horace's own scope of freedom as a poet.

March 7, 1989 - "Incompatible Goods: Freedom and Abundance"
Johnson discusses themes of freedom and abundance in Horace's "Epistles". He examines their recurrences and the dialectical rhythms in the structure of the work.

March 14, 1989 - "Stumbling onto the Tao"
Discusses Horace's philosophy in the "Epistles" from a Taoist point of view.

March 28, 1989 - "Wechseldauer: Selves as Process"
Johnson explores the concept of the self within the Horace's "Epistles". He discusses the style and approach of Horace's writing during the Augustan age.

April 4, 1989 - "The Gardens of Language (Or, What We Owe to the Sophists)"
Johnson discusses the sophist Horace and how he asks each of us to look within and note the effect of language on our thoughts and lives. He then explores the contrast between nature and technocracy and assesses the respective evils which each promotes. 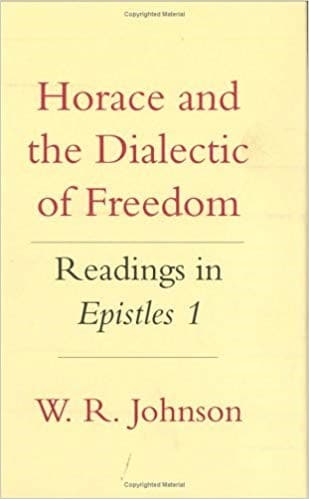 Horace and the Dialectic of Freedom is a part of the Townsend Lectures Series of Cornell Studies in Classical Philology.