The dates and titles of her seven lectures were:

February 16, 1993 - "Political Drama or Oratorio: Sartre Confronts Euripides' Trojan Women"
Loraux compares Sartre's 1965 adaption of Euripides' Greek tragedy "Trojan Women" with the original. She describes Sartre's use of the text to bring in political, psychological and sexual ideas, and points out his liberal alteration of the lines of the chorus in expressing aspects of tragedy and mourning.

February 23, 1993 - "The Theater of Dionysos Is Not in the Agora"
Loraux discusses the tragic theater of Dionysis and its relation to the political arena focusing on the idea of "anti-politics."

March 2, 1993 - "'Aei vs. Aei': Politics, Tragedy, and Antipolitics"
Loraux thoroughly explores the various meanings of the ancient Greek word "aei" which refers to something eternal. She begins by considering it as a political term, mentions its use as a concept of the kind of eternity that can only apply to gods, and then carefylly examines its meaning - and that of the related word "aei" as a term of tragedy and mourning, drawing examples from many Greek tragedies.

March 9, 1993 - ""Oikeia Kaka" and the Dilemna of the Self and the Other"
Loraux discusses "Oikeia Kaka", the suffering evoked by tragedy, in classical Greek theater. She explores memory and mourning, the ideas of 'sameness' and 'other'in civic funerals, and examines the character Ajax.

March 16, 1993 - ""Threnos" and the Tragic Question of Singing Without the Lyre--Part 1"
Loraux explores the relationship between music and tragedy. She points out that lamentations, instrumentally unaccompanied, are expressive moments within this genre of literature.

March 30, 1993 - ""Threnos" and the Tragic Question of Singing Without the Lyre--Part 2"
Loraux discusses the role of the muses and song in classic tragedy.

April 6, 1993 - "Nothing to Do with "Katharsis""
Loraux theorizes that tragedy is not only meant to move an individual's emotions, but it is meant to address the spectators as a collective -'the mortal race'. Therefore, tragedy reaffirms citizenship, while providing entertainment. She asserts that tragedic representations, such as suicide and madness, are a means to embed the humanistic message within entertainment. 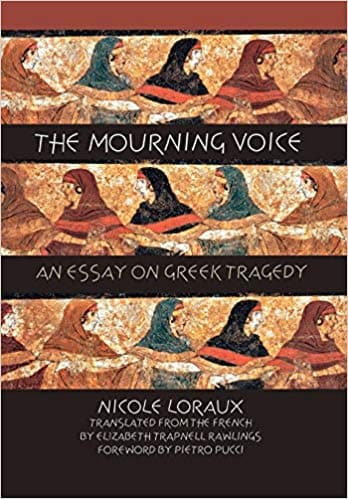 The Mourning Voice: An Essay on Greek Tragedy is a part of the Townsend Lectures Series of Cornell Studies in Classical Philology.