Two sculptures peer out from among the rows of empty storefronts in the Ithaca Mall. One depicts an ancient Greek athlete holding a discus. The other is of a male warrior’s dramatic face above a roaring lion; “Rising Warrior Within” is by contemporary Black artist Sherwin Banfield.

“The two plaster casts are in dialogue with each other,” said Verity Platt, associate professor of classics and history of art and visual studies in the College of Arts and Sciences (A&S). “Banfield’s sculpted critique of the White ideal contrasts with the classical cast’s embodiment of the Western canon.”

The artworks are part of the “Sculpture Shoppe” exhibition, temporarily housed inside a former retail clothing store. The exhibition displays selections from Cornell’s plaster cast collection of Greco-Roman sculptures alongside – and sometimes within – contemporary artists’ responses to cast culture and classical art. The curators, Platt and David Nasca, M.F.A. ’22 (College of Architecture, Art, and Planning), aim to draw the public into conversation “about the history, problematics and mutability of the ‘Western canon.’”

The centerpiece of the exhibition features several works placed within “Follies Folly,” a synthesis of architectural and theatrical follies created by Brooklyn-based scenic designer and visual artist Dan Daly. Within the folly stands a headless, armless plaster cast of the Apollo Sauroktonos, annotated with resin mushrooms created by New York City sculptor Rhonda Weppler. In another section of the folly, a broken plaster head of the goddess Athena lies face down as Weppler’s mushrooms grow from its damaged interior.

“Altering these idealized, ‘perfect’ bodies which have been marred and broken,” wrote Weppler, “the additions suggest ... the manner that mushrooms thrive in that which has deteriorated – a transformation and revitalization.”

Virginia Maksymowicz, a noted mixed-media installation artist, contributed an excerpt from her series “Comparisons,” in which she overlays images of women on silk textiles. “In recent years,” she writes, “my artwork has been following a complex visual trail of architecture and figurative/representational elements...Caryatids and canephorae are, in many ways, the visual summation of human life and women’s fundamental role in supporting it.”

Other artists in the exhibit include Kyle Staver, recipient of a Guggenheim Fellowship and the American Academy of Arts and Letters Purchase Prize; WonJung Choi, a Korean artist whose works have been exhibited nationally and internationally; and Christina West, associate professor of art at Georgia State University, whose video installation “Wounded Warrior” features a naked male model struggling to recreate a sculpted figure from a Greek temple pediment. The video piece, said Platt, upends the “gendered play of gazes” of Western viewers.

The exhibition drew so many successful artists to contribute because of its unified vision, Platt said. “Several of the artists told me that it was the intellectual coherence of Sculpture Shoppe that appealed to them, combined with the opportunity to show work in dialogue with Cornell’s cast collection within the unexpected context of the mall.”

The exhibition opened May 5 with a live performance of MUSE–AK that reinterpreted songs from antiquity as Muzak, the type of recorded background music typically played in retail spaces. The concert featured both musicians and an animatronic statue named Muse 3000; its skeletal form is now part of the exhibition.

“We had about 50 people come to the opening,” said Nasca. “Visitors have been enthusiastic about the artwork and curious about the theme. We’re very pleased with how things have gone.”

On May 29, the exhibition will close with a 6 p.m. performance by the Buffalo-based, nonbinary musician Medusa, whose forthcoming album, “The Allegory of the G/rave,” explores the myth of the Gorgon through the lens of “revenge pop.” Medusa explains that “LGBTQIA+ people –  especially the transgender and gender-diverse – see our own lives reflected in the way Medusa was turned into a monster, then exiled from society. Her story is in the process of being recontextualized by people fighting for the woman behind the ‘monster.’ What was once the visage of a sadistic hag is now becoming a symbol of power and divergence.”

The Sculpture Shoppe is open Wednesdays and Thursdays 4-8 p.m. and Saturdays and Sundays noon-5 p.m. until May 29. It is located in the Ithaca Mall near the Food Court.

The exhibition is supported by grants from the Society for Classical Studies, the Cornell Council for the Arts, and the Department of Classics in A&S. 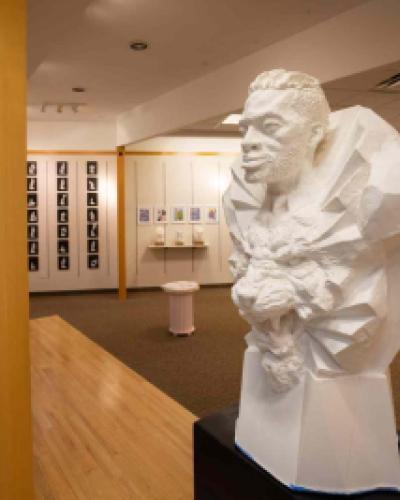 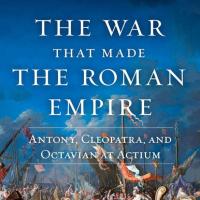 Historian delves into the battle that shaped the Roman Empire 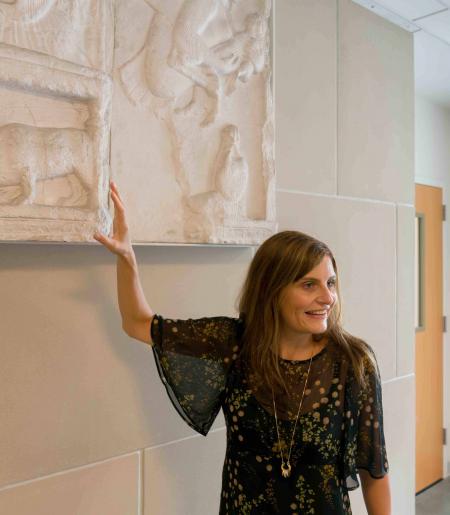