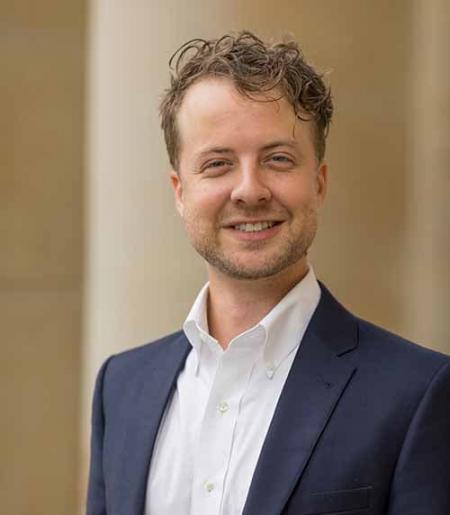 Stephen Sansom is a Hellenist specializing in early Greek poetry and its reception, especially epic, aesthetics, and digital humanities. He received his PhD in Classics from Stanford University in 2018 before joining Cornell's Department of Classics as a Postdoctoral Associate and fellow in the Active Learning Initiative.

His research focuses on how early Greek poetry represents lived experience and how we can model its work. His monograph project, Hesiod’s Shield and the Technology of Wonder, is the first book-length investigation into the role of the Shield of Heracles in Hesiod’s cosmology. Instead of debating the Shield’s authorship—a roadblock that has stymied the poem since antiquity—this book shows how the Shield mobilizes media, such as speech, ekphrasis, and the senses, to flesh out the cosmos of Zeus. His second book, provisionally titled Where Words Belong: Meter and Meaning in Greek Hexameter, uses data science and close reading to explore the meanings generated by the metrical position of words over the thousand-year history of Greek hexameter poetry. He is also archivist and researcher for an ongoing ethnopoetic project on oral poets of rural Crete and is currently analyzing live recordings of Cretan singers gathered in 2005 by a team of US and Greek scholars. His work has appeared or is forthcoming in the American Journal of Philology, TAPA, Classical Quarterly, Greece & Rome, Mnemosyne, Classical World, Classical Philology, Classical Review, Journal for Hellenic Studies, CJ-Online, BMCR, Eidolon, and for the Society for Classical Studies. Past projects include a digital map of Greek lyric, adapting Aristophanes in Silicon Valley, a MOOC on collegiate athletics, conference papers on archaic Greek poetics, and adaptations of ancient Greek and Roman comedy.

In the classroom, he believes students learn best when they have meaningful experiences, reflect on them, and make better decisions as a result. At Cornell he has taught courses on statues and public life, the history of writing, and Greek mythology that take active approaches to student learning. His work has been featured in the American Academy of Arts and Sciences and Cornell Chronicle.