The Kalavasos and Maroni Built Environments (KAMBE) Project, a collaborative research venture between Cornell University, the University of British Columbia, the University of Chicago, and the University of Toronto, takes an interdisciplinary approach to investigating the relationships between architecture, social interaction and social change in Late Bronze Age Cyprus.  It uses geophysical survey, pedestrian survey and archaeological excavation, combined with digital recording and 3D modeling, in an effort to shed light on the urbanscapes of this transformative period.

The Late Bronze Age (LBA; c. 1650-1100 BCE) saw the island of Cyprus shift from a relatively insular and egalitarian, village-based society to an urbanized, cosmopolitan civilization with hierarchical sociopolitical organization.  Previous research indicates that the new urban environments played a vital role in this profound social transformation by promoting social interactions that favored the interests of elites and underpinned their political power.  Unfortunately, the dynamics of this process are not well understood and have not been systematically investigated.  The major problem is that, while a number of Late Bronze Age sites on Cyprus have been partially excavated, we still have no clear picture of the anatomy of a Late Bronze Age city, i.e., how individual buildings were integrated into an overall urban landscape that structured social interaction. And how non-elite space worked, versus just a few well-known elite buildings.

KAMBE has been working in the Maroni and Vasilikos Valleys of southern Cyprus since 2010. The focus is on the two large LBA urban centers of Kalavasos-Agios Dimitrios (K-AD) and Maroni Vournes & Tsaroukkas (MV, MT), located in neighboring river valleys in south-central Cyprus, c. 7 km apart. We have also investigated the surrounding countryside and other sites of Late Bronze Age through iron Age (1st millennium BCE) date.  Previous excavations at both K-AD and MV sites revealed administrative complexes with monumental ashlar architecture and evidence for olive oil production and storage.  At K-AD, the excavations unearthed small, isolated glimpses of what appears to be some form of orthogonal plan, while at Maroni, the physical relationship of the monumental buildings in the Vournes locality to the buildings excavated by Manning in the 1990s on the coast at nearby Tsaroukkas, is unclear.  Using ground-penetrating radar, resistivity and magnetic survey, combined with digital mapping and modeling of the extent architecture, we have been working to generate relatively complete urban plans of parts of both sites.  This will provide unprecedented insights into the role of the new urban environments as contexts for social interactions that supported and transformed broader social structures.  The geophysics investigations have also served as a basis for excavation work we have been carrying out aimed at recovering high resolution data on the use of specific contexts of social interaction. As a result we have excavated part of a hitherto unknown LBA monumental structure at MV, and two new LBA areas at K-AD. The illustrations show some of the MV work and 2019 team. 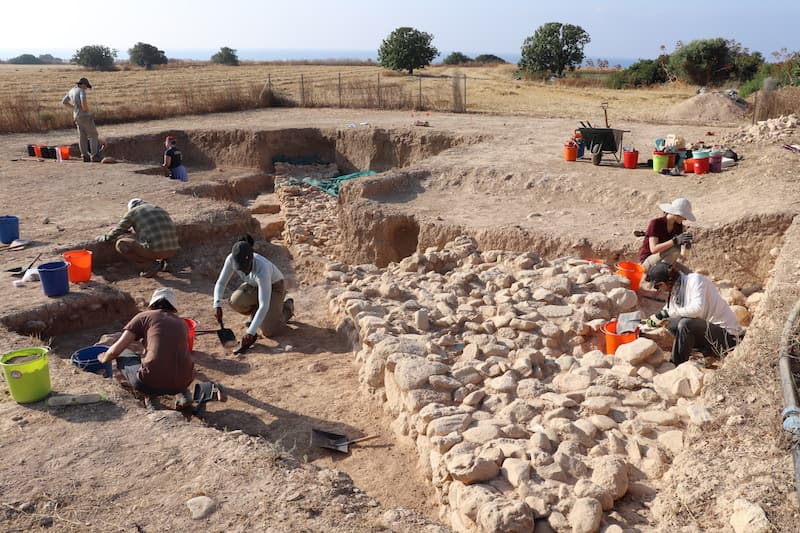 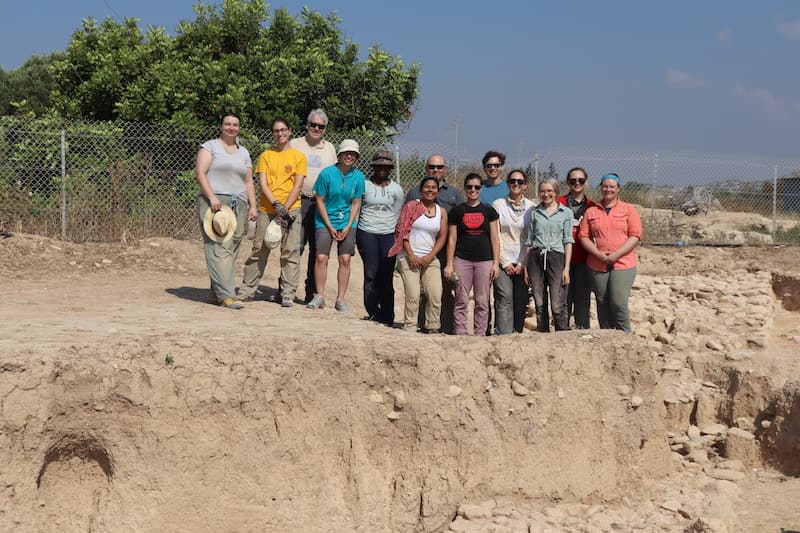 Most of the Cornell excavation team, Maroni Vournes, June 2019. 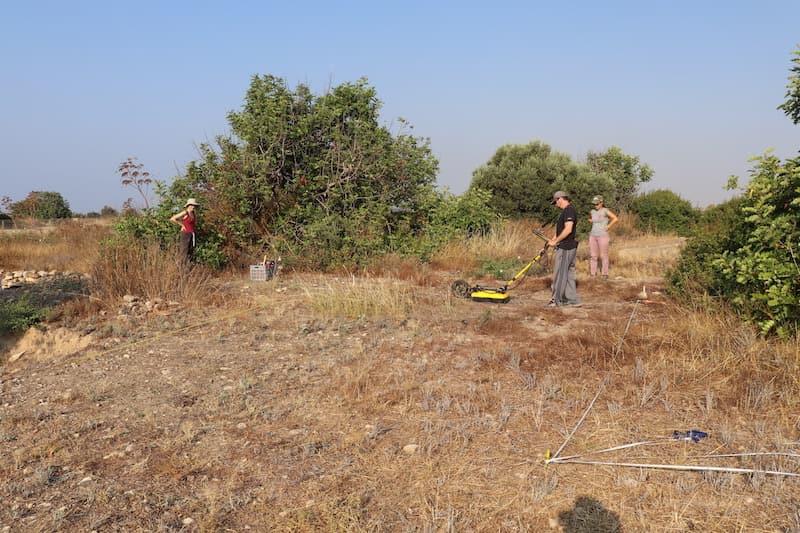